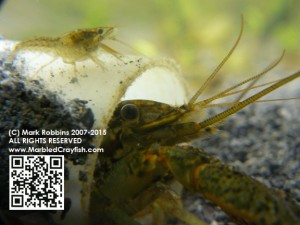 Many people have advertised blue marbled crayfish. Since I started selling from the original batch, to people who in turn sold offspring from their stock, I have seen Blue Marbled Crayfish advertised for sale. All Marbled Crayfish are clones, meaning they are identical in DNA. And all Marbled Crayfish contain blue and green colors, particularly as they age, and particularly in claws and legs, of the natural brown colored crays. However, like many species of miniature shrimp, it is the food which can cause a TEMPORARY color change. Color enhancing fish foods which contain astaxanthin and spirulina will alter the color (of some individuals – not all) to a very pleasing blue. It can range from a baby blue to a sapphire blue, to blue-green.  The true blue Marmorekrebs crayfish are Marbled Crays, , and specially bred to retain the blue gene.