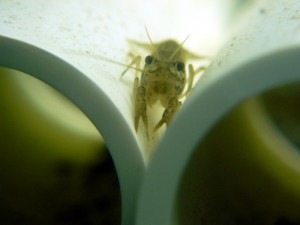 Marbled Crayfish are easy to raise and colonize.

Marbled Crays live to be about 3 years old. They do best in medium hard to hard water with a PH in the neutral to alkaline range. They do well in COOLER temperatures, between 72 – 74 degrees Fahrenheit. They can also co-habitate peacefully with aquarium shrimp and community fish. They mainly eat a plant-based diet. They do enjoy cutting plants and uprooting them, and are not a good choice for a planted tank. Providing extra hiding places is also helpful, such as pieces of PVC pipe in the community tank. This removes the stress of territorial issues, especially when they want to have babies. Like shrimp and crabs, these animals molt to grow, or literally crawl out of their own shells. They are vunerable while the new shell hardens and will need a place to hide. You may think you have 2 specimens in the tank after they molt, but part of that process is that they appear to eat the previous shell.

Marbled crayfish’s gender is always female,and she does not need a partner at all to reproduce (they reproduce pathogenically). They grow very quickly to reach the adult stage (usually is around 8 to 12 cm when fully developed inside the aquarium) in which they can start to reproduce. Each of these “female” crayfish is capable of holding 400-1000 eggs each time she “breeds” in brooding (gestation) periods between 22 and 42 days (of pregnancy). The younger adults have smaller numbers of babies, the brood sizes increase as they age. New babies will grow quickly enough to have their own babies in 5-6 months from birth. So, colony numbers will increase exponentially at least twice a year!  Unlike other crayfish, the mothers do not eat their young. Also unlike other crayfish species, they can co-inhabit in the same aquarium together with very little cannibalism, although the young ones sometimes overtake a sibling in a power play, and rip off each others’ claws and legs over a territory dispute (or food dispute). Like other cray species, they can lose a claw or leg, and regrow it back during molting.   (Those who do not regrow the lost arm will still have normal babies!) They also seem to do fine with one individual per tank, but do better in larger aquariums when it is a community tank situation with crays and fishes.

Marbled Crayfish grow by a process of molting, or shedding the exoskeleton. This begins when a cray of any size falls over on its side. Watch carefully as the entire molt can take place between 1-5 minutes. You can see how the crayfish pulls its entire body – eyes, legs out of the old shell. The top half is worked out of halfway, and then with a quick movement the cray pops off the old legs and tail. This looks like a crayfish carcass and is eaten by the crays. Sometimes, the larger older crays do not survive long after a molt, it is too much shock for their system to take, and they can die mid-molt, or after the molt is completed.  The crayfish itself has to allow the new shell to harden. I have had the experience of a large cray molting, running into a PVC tube for protection and bending his claws behind him while they were soft, and once the new shell hardened, this one had a “backwards claw arm” until a new molt corrected it.

All the new babies grow at different rates, and one “clutch” will have individuals which mature faster than their siblings. So, at the adult stage between 2 and 3 inches, some will have several clutches of babies each year. Others from the same clutch will be slower to grow. However, the “runts” seem to be the first ones to bear eggs and babies. Pictured above is a mother cray holding LIVE babies under her tail until she feels it is time for them to leave the nest – click to enlarge!

The statements provided in this website reflect the personal experience of the owner, not the results of academic research per se.